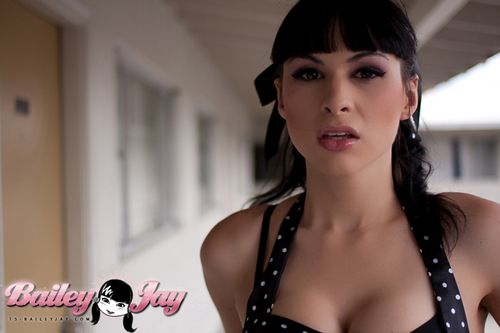 (Hollywood, CA) Undeniably Bailey Jay  has been the most prolific transsexual adult stars this year! From launching her career in adult entertainment to her AVN Award nomination for Transsexual Performer of the Year, Bailey has been delivering on the promise to be the next big thing. Bailey's stellar first year also saw virtually every movie she appeared in nominated for an award. Truly an astonishing feat for the sexy starlet.  To solidify herself as an internet sensation Bailey recently teamed up with Matt Terhune to create Bailey Jay Radio.

“I wanted to do something fun, make people laugh and that’s what the Bailey Jay Radio show is about,” said Bailey. “I’ve been having a blast doing it, and I think that comes across to the listener.”

The response to the Bailey Jay Radio show has been overwhelmingly positive.  The popular podcast has already amasses approximately 30,000 downloads a month .

Bailey Jay Radio may be subscribed to via iTunes here:
http://itunes.apple.com/us/podcast/bailey-jay-radio/id393042914

Bailey Jay is closing 2010 with incredible success. Her first year in the industry has been nothing short of amazing!