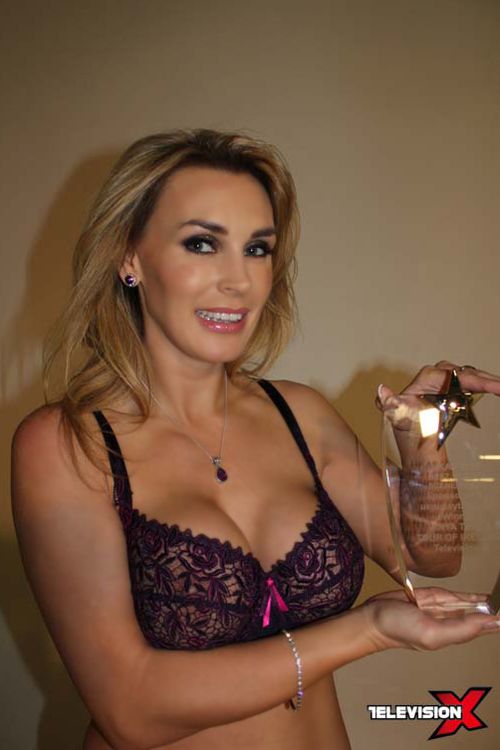 (Hollywood, CA) Top English performer Tanya Tate (http://www.tanyatate.com/) has added another award to her collection! This past weekend Tanya attended the United Kingdom Adult Producers Awards (http://www.ukadultproducers.com/) in London where her video series for Television X (http://www.televisionx.com/), Tanya Tate’s Sex Tour of Ireland had been nominated for Best Reality Scene/Series.

Tanya Tate’s Sex Tour of Ireland made the headlines in England and Ireland for the scandalous hardcore sex scene between Tanya and one of her co-stars, professional Irish athlete Greg Jacob. With the media spotlight brightly shining on the series it became a major hit.  Testament to the Sex Tour’s popularity, four scenes from the series are now among the top ten viewed in Television X’s 15 year history. It was announced at the UKAP party that Tanya Tate’s Sex Tour of Ireland had won in its category of Best Reality Scene/Series.

“It was very thrilling to win this award,” said Tanya. “We had a lot of fun on the shoot, it was exciting, the sex was hot...I’m happy it was recognized with an award. I have to thank everyone at Television X, the crew that braved the harsh Ireland weather, my publicity team of Star Factory PR (http://www.starfactorypr.com/) and of course Greg Jacob."

Tanya Tate’s Sex Tour of Ireland is currently available to watch online at http://www.televisionx.com. Tanya is looking into the possibility of a follow-up Sex Tour.

Tanya Tate’s Sex Tour of Ireland wasn’t the the only Tanya video to win that night. Diamond Geezers, another title to star Tanya, won the UKAP Award for Best British DVD. Directed by Andy Paterson and Dick Bush for Television X, Diamond Geezers showcased not only Tanya’s incredibly hot sex scenes but her acting abilities as well. Tanya stars as a sexy club owner that gets mixed up in a diamond heist. The hardcore trailer for the UKAP Award winning Diamond Geezers can be found online here: http://www.kaizenxxx.com/diamond-geezers.html

She’s busty, blonde, British and beautiful! She’s the exciting Tanya Tate, whose Sex Tour was triumphant at the UKAP Awards!