Hall Of Fame Director MILES LONG Is On The Move With Several Exciting Projects! 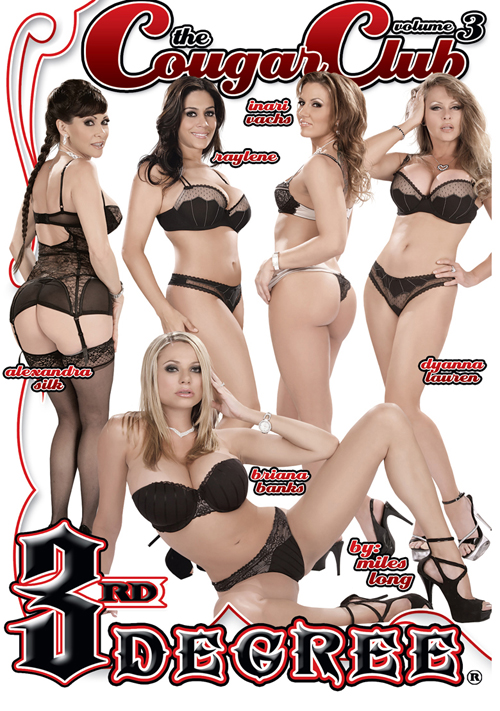 Available now, this exciting DVD contains five incredibly hot scenes that center around some of the Industry's biggest legends and superstars who eagerly go after their young meat. Alexandra Silk, Briana Banks, Dyanna Lauren, Inari Vachs and Raylene are all featured on the stellar multiple girl box cover of The Cougar Club 3.

Long was particularly proud of his scene featuring Dyanna Lauren. "Dyanna has been a huge part of my life since I entered the adult business and a great friend as well. In fact, she shot the first scene I ever performed in when I moved to Los Angeles. It was the start of my career in the Adult Business so it's especially meaningful to me that I was fortunate enough to get her last scene that she performed in." Lauren, who is an amazing singer in real life is featured in a scene in a nightclub where she sings on stage before getting it on with her bandmate and guitarist, Ramon.

Also one of Long's favorite performers, Inari Vachs, well known for her amazingly fit body and fondness for fitness, made a super hot work out date with her personal trainer at the gym. "Inari was another one of my 'Must Haves' for this movie, and it was especially fun to be with her on set again. We both laughed about the fact that the last time we saw each other on set, we were performing together," Miles explained.

Alexandra Silk, plays an airline stewardess who shows one of her passengers the meaning of 'First Class'. "This was an awesome scene that we were able to shoot on a real Jumbo Jet set from a mainstream studio." Beams Long. Other incredible scenes include: Raylene as a Drill Sergeant, who decides to give one of her recruits some personal attention, and Briana Banks, as a deputy sheriff that decides to give her inmate an 'Early Release'. The YouTube trailer for The Cougar Club 3 is available for viewing here: http://www.youtube.com/user/mileslong4real.

In addition to his prolific video work, Long has met critical acclaim with his photography as well. In addition to shooting all his own boxcovers and movie stills, Long has been working hard on his magazine photography work. This year has been a banner year for him with layouts and centerfolds appearing in Club, Club International, High Society, Hawk, Cheri, Hustler and Fox. His latest photo layout of the beautiful Sunny Leone is gracing the cover and centerfold of Velvet magazine and is on newstands now.

As if that's not enough, Long is nominated for both Director of the Year, and Best Gonzo Director at the Urban X Awards this weekend. In addition, the scene he shot and directed for Third Degree Films' Vajazzled featuring Asa Akira and Mr Pete is up for 'Best Couple Sex Scene' as well. More on the event and his nominations can be seen here: