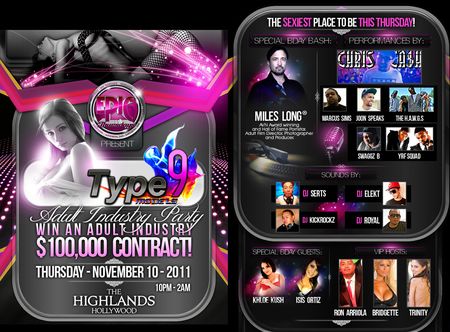 (Hollywood, CA) Award winning and Hall of Fame director Miles Long® plans to celebrate his birthday at happening Hollywood hotspot, the Highlands Nightclub, on November 10th! The party, which also features the sexy starlets of Type 9 Models, starts at 10pm on this exciting night. Located on the fourth floor of the Highlands (6801 Hollywood Blvd.) this upscale event is one not to be missed.

"Sometimes I spend so much time working that I forget to take time off to enjoy things," Miles said. "When I talked about the idea of doing a party at the Highlands Nightclub in conjunction with Type 9 Models, we all thought, what a great way to celebrate the evening. With giveaways from 3rd Degree Films, Evolved Novelties, and an opportunity to win a hundred thousand dollar adult industry modeling contract, we really wanted to make this event as special as possible. Combined with so many adult film stars in the house, the great music and hosts, Trinity St. Clair, Bridgette B and Ron Arriola, I'm really looking forward to this Thursday and an epic evening of partying!"

Currently Miles wrapped production on his next exciting video release, Laid in Lingerie; featuring Madison Ivy, Jessie Andrews, Kara Price, Nikki Delano and Kayla Carrera. "It's awesome when I can make a movie featuring such an amazing group of performers, and focus on nylons, stockings and lingerie!" noted Miles. "The scenes were so hot and steamy that I can't wait for this movie to street. With such great chemistry and plenty of nylons and stockings play in each scene, I'm sure this movie will be a hit with fans!" No release date is set for Laid in Lingerie, but stills from this highly anticipated sex film are being revealed by Miles on his Twitter account, http://twitter.com/MilesLong4real. Follow Miles on Twitter for a preview of what is to come in Laid in Lingerie and all of Miles Long's® directorial efforts.

Laid in Lingerie debuts on the heels of Teen-ie Titties, which is already tearing up the sales charts. Teen-ie Titties showcases smaller girls with smaller boobs that are easy to 'spin' around in the bedroom. "I call these girls 'Spinners'," noted Miles. "Girls like Trinity St. Clair, Tia Cyrus and newcomer Casi James are perfect for this movie. Beautiful young ladies that do some of the nastiest, hottest sex. Just the way we like it."