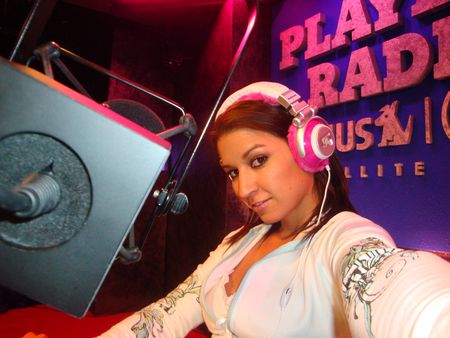 The sexy superstar will be ringing in the New Year on Sirius/XM 102.

(Hollywood, CA) Spend New Year’s Eve with adult star Ann Marie Rios with a special Playboy Radio  show! The stunning brunette beauty is going to ring in 2012 with a special live broadcast on Sirius/XM 102. Ann Marie and her sexy friends will be on the air counting down the last minutes for all the U.S. time zones.

“Some people plan on staying in or just having a few friends over, so we’re bringing the party to them on Sirius/XM 102,” Ann Marie said. “Doesn’t matter what part of the country you are in, we’ll help you countdown the final moments of 2011 in a fun and sexy way!”

"It is very exciting to be recognized for your work," Ann Marie said. "Escaladies has been one of my favorite series I've worked on and I think it's awesome that I was nominated for it. I hope the series continues and that I'm a part of it."

Ann Marie has also been nominated for her stand-out girl/girl performances with nominations in the Best Girl/Girl Sex Scene category for her pairing with Alexis Texas in Dirty Panties from Belladonna/Evil Angel and the Best All-Girl Group Scene category for Party of Feet 3, again from Belladonna/Evil Angel. "I have been fortunate to work with some of the best talent in the adult industry," said Ann Marie. "From incredible directors to gifted performers; they have all aided in bringing out the best in me." The 2012 AVN Awards is set to take place at The Joint in Las Vegas' Hard Rock Hotel on January 21st. More information on the show can be found on the official AVN Awards website; http://AvnAwards.Avn.com.

2011 has been one of Ann Marie Rios' most impressive years in the adult industry to date! With three AVN Award nominations Ann Marie heads into the new year at full throttle! Join her on Playboy Radio and start 2012 with a bang!