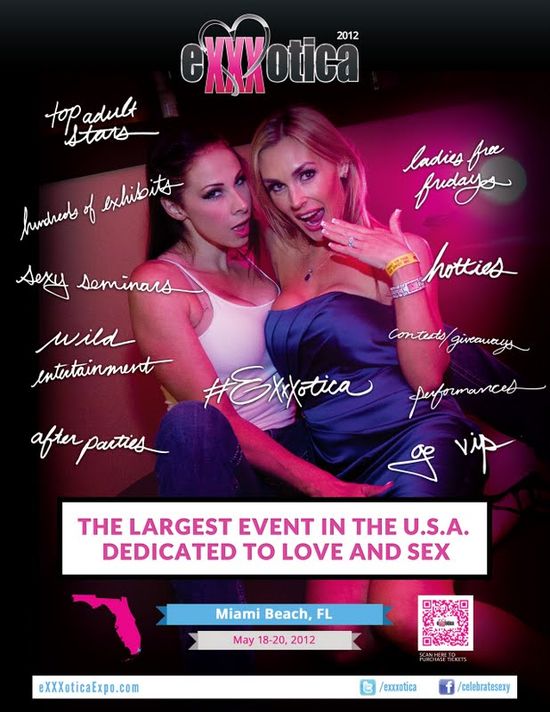 "Check In" or "Tweet" a picture of the EXXXOTICA Miami Beach billboard that features Tanya Tate to be entered in drawing to win the top selling adult novelty toy.

(HOLLYWOOD, CA) Adult entertainment superstar Tanya Tate (http://TanyaTate.com) adds extra excitement to her EXXXOTICA Miami Beach appearance, May 18-20 at the Miami Beach Convention Center, with a social media based game. Tanya is set to make a signing appearance at the annual EXXXOTICA Miami Beach event this weekend and is featured on billboards in the promotion of the expo. Fans who "tweet" a picture of themselves with the Tanya Tate EXXXOTICA billboard using tags @TanyaTate and @EXXXOTICA or "check in" at the billboard location using Foursquare will be eligible to win a signed Tanya Tate Fleshlight.

"I'm very flattered that EXXXOTICA is using my image in their marketing campaign," said Tanya. "They have used the imagery of the biggest names in adult entertainment to promote their successful shows. To be among those ladies is very thrilling. I wanted to celebrate this occasion, so I thought it would be fun to do a giveaway of my newly released Fleshlight novelty toy utilizing social media."

Now through the final day of the show, May 20th, fans over 18 years of age may enter. Tanya will be appearing at EXXXOTICA Miami Beach this weekend, signing at the CLUB Spotlight booth. There, Tanya will be signing her latest DVDs, 8x10s and of course, her Fleshlight. Tanya's EXXXOTICA signing times will be found on her official website TanyaTate.com. EXXXOTICA will be taking place at the Miami Beach Convention Center located at 1901 Convention Center Dr., Miami Beach, FL 33139. Ticket and other information can be found on the official EXXXOTICA Miami Beach website: http://mb.exxxoticaexpo.com/tanya-tate-to-appear.