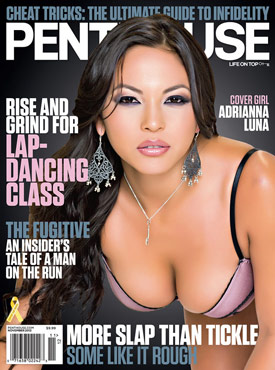 "I tried to think of a way to express my excitement and gratitude for the opportunity to be Penthouse Pet for November, but words just can't do justice for what I'm feeling" said Adrianna. "I'm overwhelmed and know I'm so ucky for the chance to carry such an acclaimed title. Penthouse has been very good to me and I'm thrilled to have such a wonderful relationship with an epic publication. Penthouse is legendary and I'm more than proud to be a part of the beautiful product they create every month."

"We are very excited to have Adrianna Luna as our Penthouse Pet of the Month for November" said Francisco Guerra, Director of Production for Penthouse. "We have been lucky enough to watch her career blossom since the beginning and naming her as Penthouse Pet is the perfect next step. From her first photo set to the many scenes she has filmed for Penthouse, Adrianna never fails to impress us or the fans."

Take one look at some photographs of November's Penthouse Pet, and it is obvious why the sultry actress is on everyone's mind. She's stunning. Showing off her supple curves, Adrianna radiates on the cover of the top selling magazine, staring seductively at readers through smokey eyes. When viewers open the magazine, they'll find an array of electrifying photographs of the starlet. Some of the most noticeable feature Adrianna in a lush pool, surrounded by rocky walls and waterfalls. Adrianna poses by the pool, a coy smile on her lips. Other photographs feature her in the pool under a waterfall. Water streams through her raven hair, causing is to stick to the beautiful figure the CrossFit enthusiast works so hard to maintain. The pictorial is garnering quite a reaction from critics and driving fans wild.

"My fans are everything" a gracious Adrianna said. "They're the reason I work so hard. They're the reason I don't quit - even when I'm tired or frustrated. I have a loyal fan base and I do everything I can to keep them happy while doing work that I believe in and I love. I've had such a strong and positive reaction from viewers who love the Penthouse Pictorial and for that, I am very, very grateful."

The November issue of Penthouse is on sale at Newsstands now. To see a sampling of Adrianna's Penthouse Pet photographs, please click here: http://ow.ly/enY4R