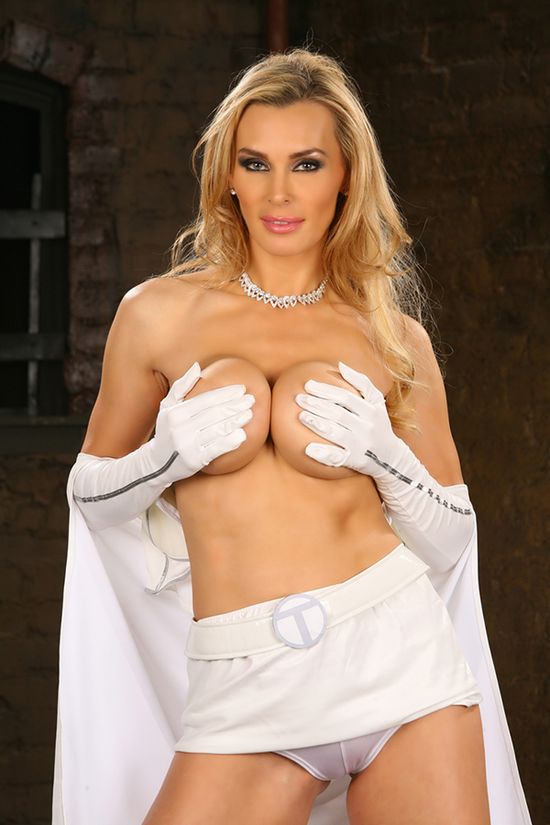 Tanya’s 6th directorial effort for Filly Films features geeky themes and bondage.
For Immediate Release: October 18th, 2013
(HOLLYWOOD, CA) Multi-award winning performer Tanya Tate (http://tanyatate.com/) has finalized the cast and title for the sixth movie she is directing and starring in for Filly Films. Tanya Tate’s Cosplay Queens and Tied Up Teens delves into the fun act of costume play that Tanya has become popular for in geek circles. Since 2010, Tanya has become a staple among the Comic Con crowd; appearing, signing and even taking part of panels have become the norm for Tanya. With an action figure and comic book in the works for release in 2014, the Liverpool native thought it was time to showcase her geek-centric hobby in an adult movie. While Tanya is leading the cast she has hand-picked some well known adult star cosplayers as well as fresh faced starlets to populate her movie; Amanda Tate, Annie Cruz, Cassie Laine, Ela Darling, Jillian Brookes, Nicki Hunter and Zoey Holloway.
“Ever since I started to cosplaying, the most asked question from fans has been when was I going to do a cosplay adult movie,” said Tanya. “I thought it was the right time. I feel confident as a director and I also booked stars one would likely see at a comic-con, to lend a certain level of authenticity. I thought about naming the movie Hotties of Cosplay as a nod to the TV show Heroes of Cosplay, but thought the current title was a little more naughty. It’s going to be a fun movie, with a lot of hot girls tied up in superhero costumes. Fans are going to love it.”
Tanya Tate’s Cosplay Queens and Tied Up Teens begins filming in Los Angeles this weekend. Fans who desire a taste of the film, can follow Tanya on Twitter, where the superstar performer will be posting images from the set. Tanya’s twitter is Twitter.com/TanyaTate.
Fans of Tanya’s movies can pick up the rest of her Filly Films filmography by visiting her online store. At TanyaTateStore.com, signed copies of the award nominated Brit School Brats, College Cuties Seduce MILF Beauties and more can be purchased.
Sexy superheroes and girls bound tight are the subject of Tanya Tate’s new movie; Tanya Tate’s Cosplay Queens and Tied Up Teens!
For more Tanya Tate please visit the Tanya Tate network:
www.TanyaTate.com
www.JustaLottaTanya.com
www.TanyaTateStore.com
www.Twitter.com/TanyaTate
www.ItsMyUrls.com/TanyaTate
Tanya Tate self represents and can be booked direct:
www.BookTanya.com
For more pictures of Tanya Tate please click here:
www.starfactorypr.com/Tanya_Tate.zip
To interview Tanya Tate for your Website or Publication;
Please contact Star Factory PR
Info@starfactorypr.com
818-732-0191
A press release by
www.StarFactoryPR.com
###