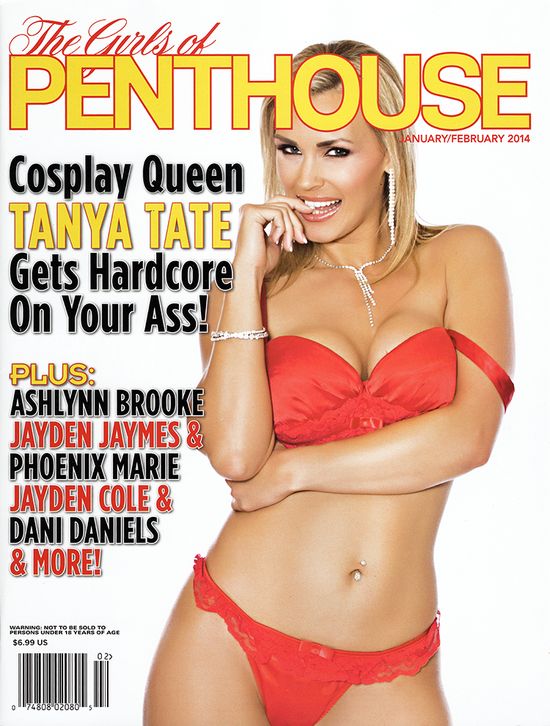 The sexy superstar slips out of her superhero costumes for a scorching hot pictorial!

(Hollywood, CA) International adult superstar Tanya Tate (http://tanyatate.com) is showcased on the cover of the new issue of Girls of Penthouse magazine. The January 2014 issue features the bombshell beauty in a festively red lingerie set that shows more skin than one would see at Comic-Con. Glammed up in diamonds, Tanya shines as the magazine recognizes her geekdom popularity with a blazing headline across the cover that reads “Cosplay Queen Tanya Tate Gets Hardcore On Your Ass!” Inside the magazine, several pages are dedicated to Tanya. Her beautiful body and model-esque moves are on display in a spectacular set of images.

“I’m very thrilled to be on the cover of Girls of Penthouse,” Tanya said. “I am happy with the way the magazine featured me. I love the fun and sexy layout, the cover looks exciting and to be called ‘Cosplay Queen’ on the cover is the cherry on top.”

In addition to the jaw-dropping pictorial, the issue also features a pop quiz about the sexy superstar, testing readers with Tanya trivia. Fun questions range from “What is her favorite Disney films?” to “Tanya is from the same town as what classic rock band?”

The Tanya Tate Girls of Penthouse magazine is available on newsstands now. A limited amount of signed copies are available from Tanya’s online store: TanyaTateStore.com.

Coincidentally, the newest movie starring and directed by Tanya is titled Tanya Tate’s Cosplay Queens and Tied Up Teens. The movie is set to be released on DVD from Filly Films December 30th. Cosplay Queens and Tied Up Teens features Tanya and other top stars suited up and stripping out of sexy superhero costumes for hardcore fun. The trailer can be seen on the official Filly Films website, http://bit.ly/TTCQTUT and signed copies are available from the Tanya Tate Store: TanyaTateStore.com.

The Cosplay Queen is covered on the new issue of Girls of Penthouse magazine. The Tanya Tate packed issue is available on newsstands now!