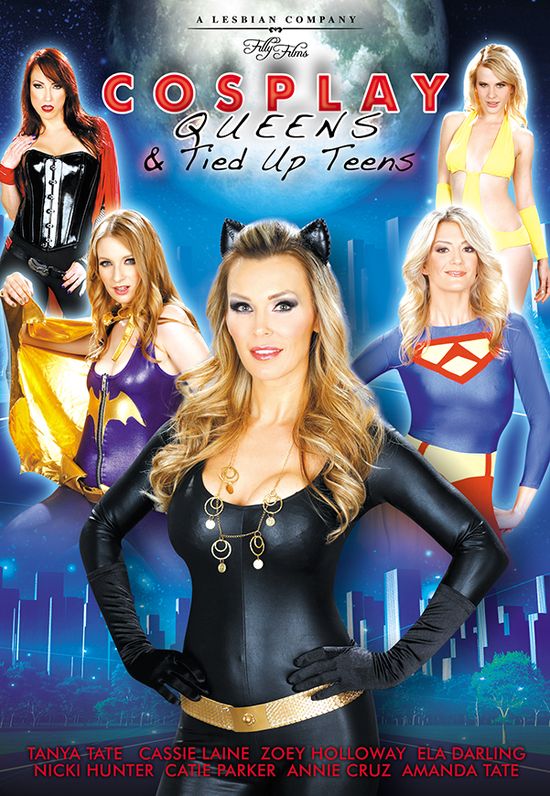 The new sex fest for geeks from director/star Tanya Tate receives 5 star rating from NightMoves Magazine and All Adult Network as well as many other accolades from adult movie critics.

(HOLLYWOOD, CA) Filly Films latest video directed and starring the multi-award winning adult actress Tanya Tate , Cosplay Queens And Tied Up Teens, looks to be the front runner of this year’s geek based titles. The lesbian themed super hero fantasy has ben praised for it’s authenticity by featuring real life cosplayers and gamers as well as passionate girl on girl performances. Tanya, a well noted and popular personality in geekdom, has crafted her love letter to the hobby of cosplay and comic cons with this movie. Reviewers are praising in unison the sexy fun film.

Art Koch from NightMoves Magazine and AllAdultNetwork.Tv raves in his 5 star review “Ms. Tate looks absolutely delicious in her various costumes and the rest of the ladies fill theirs out very well before they shed them. The direction is done with fun and good visuals in mind and works well. The sex in each scene has some very steamy moments with some very nice chemistry and just the right amount of feigned surprise and fear by the subjects.”

“Tanya is a beautiful woman with a fondness for other women and it really showed. If you’re a fan of Cosplay, you’re going to like this DVD,” noted Captain Jack at AdultDVDTalk.com.

“Great bondage play here. Overall this is a movie with some very hot girls, sexy light bondage, cosplay and a bit of peril as well,” noted Rog from RogReviews.com. “This one works for cosplay fans as well as those who just love watching hot chicks get it on with each other.”

“Tanya Tate is the multi-award nominated (and winner) who has largely taken over the cosplay niche of wearing superhero costumes as part of her appeal to fans. Going to comic book conventions or simply dressing up to inspire the fantasies of fans, she has really led the pack in the field, her work at Filly Films as a director also providing fuel to get fans draining their dragons of ball batter.” said Don Houston of XCritic.com.

“It’s great that reviewers have really taken a liking to this movie,” said Tanya. “I knew the fans would, because they are the ones who have been asking me to make it. But I know cosplay is not for everyone, so I’m really glad it’s being appreciated.”

Posted at 06:28 AM in Press, Tanya Tate, Tanya Tate's Cosplay Queens And Tied Up Teens | Permalink