TANYA TATE Makes A Special One Night Only Appearance At Spearmint Rhino Birmingham! 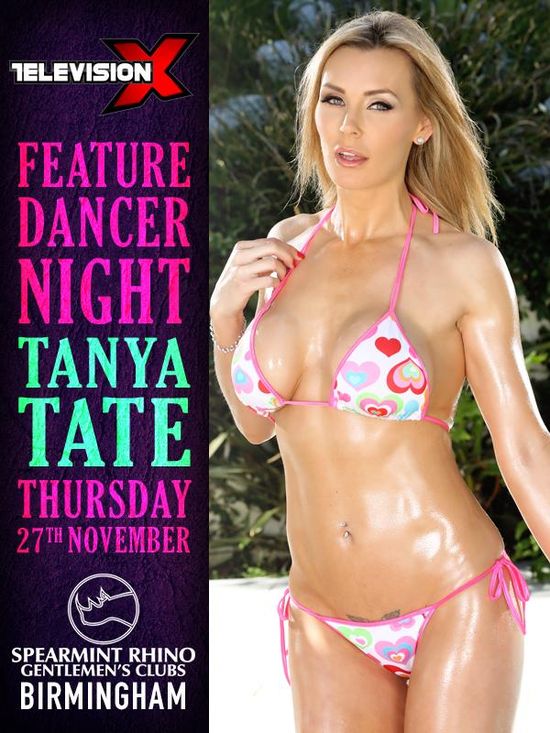 (LIVERPOOL, UK) Multi-award winning adult superstar Tanya Tate will be making her only UK appearance this week, 27 November, at the Spearmint Rhino Birmingham. The director/star of movies like Cosplay Queens and Tied Up Teens, Brit School Brats, and the taboo themed Lesbian Family Affair, will be meeting fans, posing for pictures, and signing autographs at this Television X sponsored event. Tanya made headlines in the UK for her controversial Television X sex series; Tanya Tate’s Sex Tour of Ireland in 2010. Then in 2013, she starred in a mainstream documentary that was broadcast across England on Channel 4 titled Date My Pornstar. Now, Tanya invites her British fans to party with her in Birmingham.

“Even though my trips back home to England are packed with shoots, meetings, and interviews, I always make the time to have at least one opportunity for my UK fans to meet me,” said Tanya. “This Thursday, the party is going to be at Spearmint Rhino Birmingham. I look forward to an unforgettable night.”

The Spearmint Rhino is located at 64 Hagley Rd, Birmingham, West Midlands B16 8PF. More information on Tanya’s appearance can be found on her official website: http://bit.ly/TanyaSRB14.

While at the Spearmint Rhino, Tanya will have on hand a limited supply of her newly released fantasy movie from Filly Films, Lesbian Family Affair. The controversial video depicts girl on girl sex between relatives. Tanya directed the movie and also stars in two of the explicit sex scenes. “This erotic fantasy is something I think fans will love. I have received such positive responses from similar themed movies like Mommy & Me 10, which I also directed, that this was a natural progression,” said Tanya. Fans who cannot make it to Tanya’s appearance can order signed DVDs of the movie from http://bit.ly/LFAonDVD.