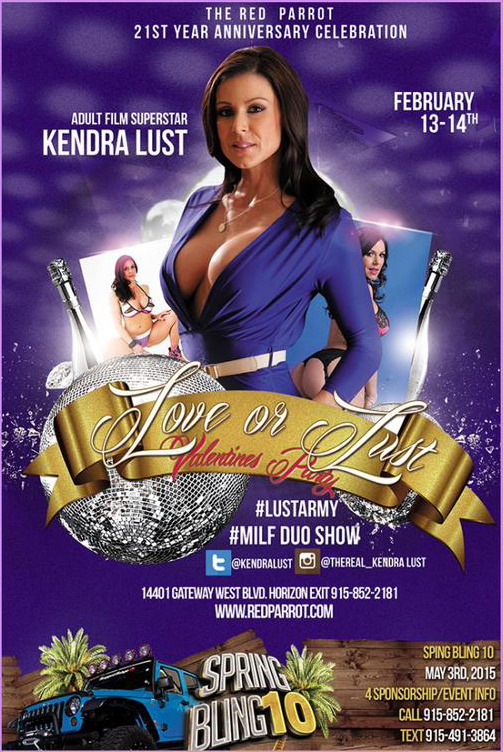 “I wanted to do something special for Valentine’s Day,” said Kendra. “And spending it with the fans at The Red Parrot is the perfect way. We’re going to have so much fun that I can’t express just how excited I am.”

After every performance, Kendra will be on hand to meet fans, pose for pictures and sign merchandise. The Red Parrot is located at 14401 Gateway Boulevard West in El Paso, Texas. More information on the venue can be found on the club’s official website: http://www.redparrot.com.

In other Kendra news, two new movies to feature the award winning star have been released. The taboo themed Lesbian Family Affair 2 from Filly Films sees Kendra in a hot three-way that is sure to be remembered come award season. When Mom Kendra Lust, catches daughter Ariana Grand massaging sister Whitney Westgate’s boobs, she steps in to show her the right way to do it. The rub-down turns dirty when the girls get turned on and an orgasmic afternoon occurs. Kendra also stars in Women Seeking Women Vol. 113 from Girlfriends Films. Both movies are currently available from adult retailers.