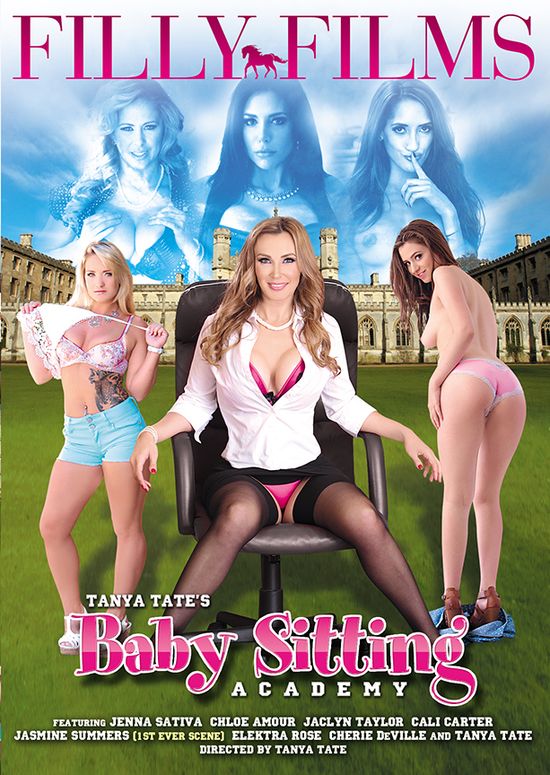 (HOLLYWOOD, CA) Filly Films has debuted the DVD box cover and trailer for the upcoming movie Tanya Tate’s Baby Sitting Academy. Written, directed and starring Tanya Tate, this video marks Tanya's eleventh's collaboration with Filly Films as a director of their lesbian themed movies. Tanya Tate’s Baby Sitting Academy features a cast of MILFs pairing up with barely legal beauties, a theme in Tanya’s films that has become her trademark. Joining Tanya in the movie are Chloe Amour, Cherie Deville, Jaclyn Taylor, Jenna Sativa, Elektra Rose, Cali Carter and in her debut sex scene, Jasmine Summers. The trailer and key art for the movie have been revealed online and Tanya is thrilled.

“The cover looks hot!” said Tanya. “Filly Films has some incredible people on staff and have designed a cover that is attention grabbing and has a high-end feel. The trailer is fun, frisky and invites you in to our little academy. You get a taste of all the passion and insatiable lust that’s in the movie. Well done!”

Set for a September release, the box cover and trailer for Tanya Tate’s Baby Sitting Academy can be found on the Filly Films website: http://bit.ly/TanyaTateBSAFF.

In Tanya Tate’s Baby Sitting Academy, Tanya is training lesbian teens to seduce sex starved housewives in her game of extortion. Jasmine Summers signs up for the academy but does she have what it takes to trap a cougar? Tanya Tate demands a taste of the newbie and gives Jasmine’s pussy a seal of approval. Baby sitter Chloe Amour slips up and sexes Jenna Sativa, the teen she’s watching, instead of the girl’s mom. Jaclyn Taylor is in the mood for some special servicing from her daughter’s baby sitter and Elektra Rose is more than willing to comply. Not all the sitters are pros as a complaint by customer Cherie Deville about Cali Carter brings Tanya in to make things right the only way she knows how, …with an orgasmic three-way. Tanya is looking for a few bad girls who don’t mind using their bodies for financial gain in Tanya Tate’s Baby Sitting Academy!

Join the British adult superstar for sex, seduction and lesbian lust in the next movie from Filly Films; Tanya Tate’s Baby Sitting Academy!