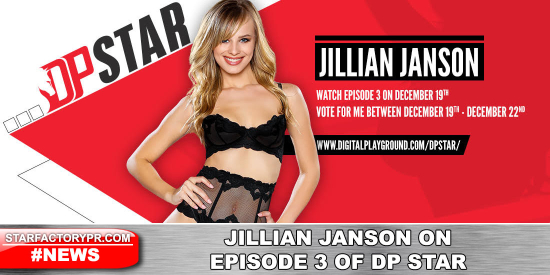 Popular performer Jillian Janson will be appearing on next week's episode of DP Star.

Get ready for a scorching hot episode of DP Star as award winning superstar Jillian Janson will be on the show. On December 19th, 2016, Jillian will be appearing as a contestant to become the next Digital Playground star.

After the episode has gone live, Jillian fans can show their support for barely legal beauty by casting a vote for her. Voting begins on December 19th and ends on December 22nd here: http://www.digitalplayground.com/dpstar/seasons/season3/

Head over to DP Star on December 19th to watch Jillian show off the sexy moves that have made her a star!

Interview requests for Jillian Janson can be made to Star Factory PR:info@starfactorypr.com.

Posted at 04:00 AM in Jillian Janson | Permalink