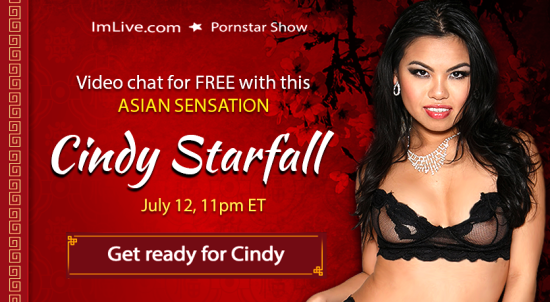 (HOLLYWOOD, CA) Adult entertainment superstar Cindy Starfall (http://cindystarfall.net) is showcased as IMLive’s featured celebrity. IMLive will offer fans a chance to enjoy a free hardcore video chat with Cindy, on July 12th. One of the industry’s most popular Asian performers, Cindy has amassed an incredible following. With hundreds of scene credits to her name, Cindy has become well known for her lustful ways and willingness to push the boundaries of her sexuality. Now, viewers will get to see Cindy in action in a special IMLive video chat.

“Anyone that has seen my webcam shows know just how dirty I can get,” said Cindy. “For this special IMLive show I’m going to get even more hardcore. You don’t want to miss me on July 12th!”

The one-hour webcam show takes place at 8pm PT / 11pm ET on July 12th! Information on how to join the party can be found on the IMLive website - http://bit.ly/watchimlive.

Cindy would also like to announce that she is a sponsor of the 2017 Urban X Awards. The Urban X Awards celebrates the best in ethnic adult video. “The Urban X Awards are an important part of the adult entertainment community and I am proud to be a show sponsor,” said Cindy. “I look forward to attending the event and encourage other performers to show their support.” The Urban X Awards is scheduled to take place August 20, 2017, at Stars On Brand in Glendale, CA. More information on the awards can be found on the show’s official website: http://urbanxawards.com.

A press release by
StarFactoryPR.com
###

Posted at 02:36 AM in Cindy Starfall | Permalink