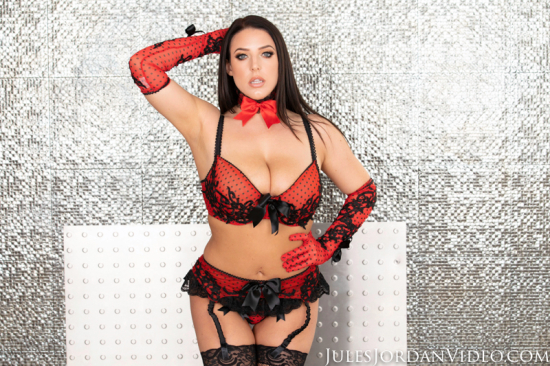 (HOLLYWOOD, CA) Adult entertainment superstar Angela White (http://angelawhite.com/) is featured in a dozen high profile new releases this month. The epic year of Angela White continues as the Australian beauty delivers another wave of powerful showcases titles and amazing performances. One of the hardest working women in the industry, Angela continues to raise the bar, delivering diverse performances that are filled with all the passion and energy that she has come to be known for. This September, Angela is featured in several high-profile titles as companies recognize not only the professionalism and sexual commitment Angela brings to her performances, but her popularity among the porn buying public.

VIXEN’s Natural Beauties 9 features Angela’s collaboration with Greg Lansky, entitled: “I Waited For You.” Written by Angela, the scene brings together Manuel Ferrara and Angela for an unforgettable scene. Utilizing the cinematic flair that has become his trademark, Lansky captures the organic lust between the award-winning performers in a scene that is authentic, romantic and beautiful. Angela is featured on the Natural Beauties 9’s DVD Cover and key art.

Once again Angela is paired up with Manuel Ferrara in another passion-filled scene, directed by Dana Vespoli, for Red Light District’s Secrets That We Keep. The scene showcases the intense chemistry and affection that Manuel and Angela have become known for. Angela, dressed in a body-hugging black dress, is featured on the DVD cover.

Kleio Valentien saves Angela from dying of dehydration in Elegant Angel’s post-apocalyptic tale Squirtwoman: Wasteland. In a world where water is scarce, Kleio has a secret that can save humanity. Her orgasmic eruptions can quench the thirst of those that can make her climax. Luckily for Angela, she has the skills to make that happen. The trailer for this epic by Dreadneck can be seen here https://www.elegantangel.com/2547503/squirtwoman-wasteland-streaming-porn-videos.html.

Another Elegant Angel title to drop in September that features Angela is Teach Me Vol. 5. Super sexy Karlee Grey is looking for a lesson in lesbian lovemaking and Angela is the perfect person to show her the way. Veteran lensman Pat Myne directs these gorgeous girls and captures the innocence and experimental tone of this theme. The trailer and DVD box cover, which feature both Angela and Karlee, can be found here https://store.elegantangel.com/2533161/teach-me-vol-5-porn-movies.html.

Angela portrays herself as a mousy tutor to Ramon Nomar in Reality Kings' RK Prime #11. This fun and sexy scene brings fantasy to life as the busty, yet demure tutor lets go of her inhibitions and sexually devours her student. The DVD cover art for RK Prime #11 features a stunning image of Angela.

Naughty America presents Angela seducing Johnny Castle in Dirty Wives Club Vol. 17. Angela has the moves, the body, and the mind to get any guy she wants, so it not long before Johnny gives in to banging his buddy's wife.

Summer may be ending but Angela White is hotter than ever! Fans of the critically acclaimed star have several new titles to look for!