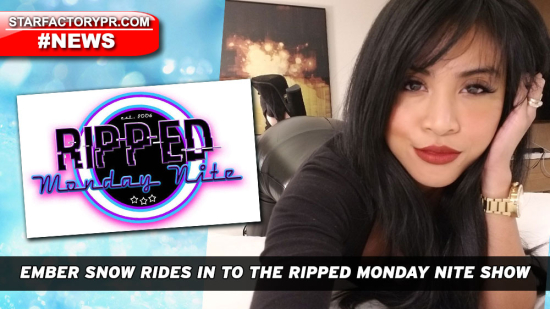 What’s it like as an AVN Awards and XBIZ Awards nominee? Ember Snow talks about her nominations and more this Monday with the Ripped Radio crew!

Exotic adult actress Ember Snow has been making some major moves in the industry. By showing off her sexy skills on camera and seducing fans via social media, Ember has established herself as an XXX-girl to watch. The popular performer has even been rewarded with some nominations in the upcoming awards. So what is the secret of her success? The Ripped Radio crew will be looking to find out everything about this stunning star on their next show.

Ember will be appearing on the January 14th Ripped Monday Nite show. The party starts at 5 PM PST and can be heard here: rippedradionetwork.com.

If you are not already following Ember on Twitter - make it happen - https://twitter.com/embersnowxxx! She’s been blowing up her timeline with tastes and teases from her ManyVids account. Sample the exclusive hardcore videos that you will only be able to see on ManyVids for free, just by following Ember on Twitter. Then when you want to get in on all the action, you can jump over to ManyVids and connect with her here: https://www.manyvids.com/Profile/1000518974/EmberSnow/.

Interview requests for Ember Snow can be made to Star Factory PR: [email protected].