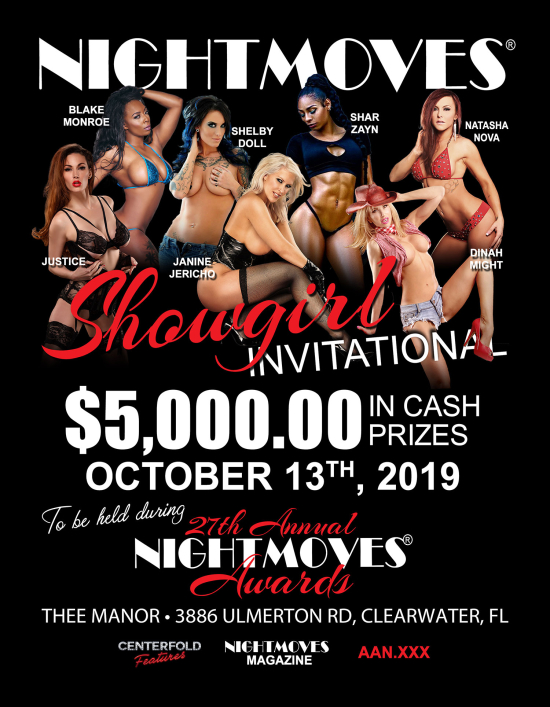 The 27th Annual NightMoves Awards has added the $5,000 Showgirl Invitational Dance Contest to its festivities this year!

TAMPA, FL (AUGUST 28th, 2019) – Giving out over 75 awards isn’t enough for the NightMoves Awards (https://nightmovesonline.com/) as this year they added The Showgirl Invitational Dance Contest to the lineup. The contest will feature seven of the top feature dancers in America who will battle it out for $5,000 in cash prizes, trophies and a return booking in the Tampa Bay area. The contest will feature (in alphabetical order) Blake Monroe, Dinah Might, Janine Jericho, Justice, Natasha Nova, Shar Zayn, and Shelby Doll. They will be judged by a panel of celebrities and perform on Sunday, October 13 at the all-new Thee Manor Gentlemen’s Club in Clearwater, FL.

Voting for the 27th annual NightMoves Awards began on July 15th and runs until September 15th. There are 29 National Categories and 13 Local Tampa Bay Area Categories that will be decided by fan votes! Last year over 350,000 votes were cast! Results will be announced Oct. 13, 2019, at Thee Manor Gentlemen’s Club in Clearwater, Florida! NightMoves gives out two awards in each category - a “Fan’s Choice” winner and an “Editor’s Choice” winner. Everyone may vote by going to www.NightMoves.xxx!

The NightMoves weekend starts Thursday, October 10 when the first “Star Caravan” visits The Whiskey Gentlemen’s Club in Seminole, FL. The following night the stars travel to 4-Play Gentlemen’s Club in St. Petersburg, FL. Saturday afternoon features FanFest that takes place in the Clearwater Clarion Hotel Ballroom. That same evening “Star Caravans” invade the world-famous 2001 Odyssey in Tampa, FL. and Sinsations in Clearwater, FL! The Awards Show itself will take place at the Thee Manor Gentlemen’s Club, 3886 Ulmerton Road in Clearwater, FL. Doors will open to the public at 7:00 pm on Sunday, October 13th.

“We are excited to have the NightMoves Awards at Thee Manor this year. This club has just been renamed and refurbished from top to bottom with new carpeting, new furniture, new light & sound systems, and a new stage! It will be a great location for our first NightMoves Showgirl Invitational Dance Contest and the Awards Show”, said Paul Allen owner of NightMoves Magazine.

NightMoves Magazine started in 1988 and the first NightMoves® Awards, which took place in 1993, is the third oldest and continuously running adult awards show in the United States, trailing only the AVN Awards and the “industry only” XRCO Awards. To be considered eligible, a movie had to have been released between June 16, 2018, and June 15, 2019. Individual Awards are also based on this same time frame except for those in the “New Starlet” category, whose performances between January 1, 2018, and June 15, 2019 qualify.

Fans and industry people can log their votes for their favorite adult performers, directors, films, and feature dancers at www.NightMoves.xxx.

The voting period runs until September15th. Only one ballot allowed per IP address and a legal ballot must have votes in at least 6 categories.

The NightMoves® Awards were the first to allow fans to select their winners, making it the original Fan-Based Awards, as well as the first awards show to allow on-line voting. In addition to the Fan Awards, the show presents Editor’s Choice awards, based on reviews of movies in which nominated performers have appeared.

For more information on the NightMoves® Awards, visit
http://www.nightmoves.xxx. It can also be followed on Twitter at http://twitter.com/NightMovesShow or on Facebook at https://www.facebook.com/NightMovesMagazine/.