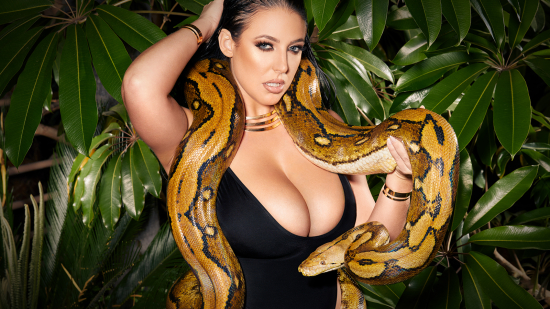 "Three-peat" is the word of the night as Angela earns third consecutive wins in five categories at the 2020 AVN Awards show.

(HOLLYWOOD, CA) AVN Hall of Famer Angela White (http://angelawhite.com/) made history at the 2020 AVN Awards becoming the first person to win Female Performer of the Year three times. The 37th annual AVN Awards took place on the last Saturday in January in Las Vegas, and Angela was honored with a massive 11 trophies.

“Thank you AVN for this immense honor,” Angela said. “I am extremely grateful for the overwhelming generosity I have received from AVN and this amazing industry. Thank you AVN for again recognizing my work, as well as that of my collaborators, with an incredible 11 awards. As a girl from small town Australia, who never even dared to dream of standing on the stage at the AVN Awards, the experience of being named Female Performer of the Year for a third time is hard to comprehend and even harder to put into words. What I do know is that none of it would have been possible without the passion, perseverance and talent of so many: thank you Jules Jordan, Kayden Kross and Bree Mills for spotlighting me in such amazing projects; thank you to all the wonderful directors and performers that make my continued sexual exploration in adult entertainment possible; thank you Mark Spiegler and George for your friendship and unwavering support; and thank you to my wonderful fans for supporting me throughout this journey.”

Another memorable occasion was Angela’s Best Leading Actress win for her stand-out performance in Adult Time's high-profile drama ’Perspective.’ It has been over a decade since an individual won Female Performer of the Year and Best Leading Actress on the same night, with Angela becoming only the third individual to achieve the feat.

An unforgettable and historic night sees Angela White winning several awards in Las Vegas. For the third year in a row, Angela wins AVN’s Female Performer of the Year Award!