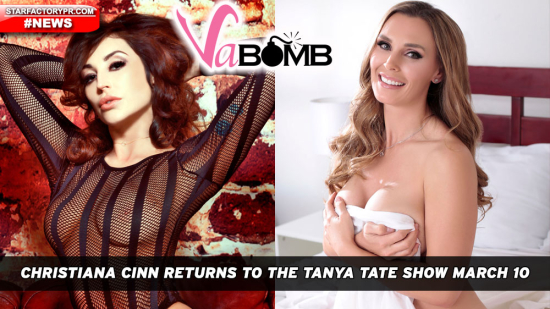 This Tuesday, don't miss out as Penthouse Pet Christiana Cinn will be on The Tanya Tate Show to discuss her new vaginal tightening bath bomb - VaBomb!

Want to hear what Christiana has to stay and find out more about VaBomb, you don't want to miss this show. Anyone can call in to talk to Christiana and Tanya during the live broadcast. The number to hit up is 855-99-VIVID. The Tanya Tate Show featuring special guest Christiana Cinn will be heard this March 10th on Vivid.com or SiriusXM channel 415 at 1 pm PT / 4 pm ET.

Looking for more info on VaBomb? Visit the official website - https://shopvabomb.net. You can also score some of Christiana's naughty goodies on MySexyAuctions! She has listed several personal items that collectors will want to get their hands on like personally worn bikinis, thongs, heels and more! Take a look at https://www.mysexyauctions.com/model/christiana-cinn/.

Interview requests for Christiana Cinn as well as Tanya Tate can be made to Star Factory PR Tanya@StarFactoryPR.com.