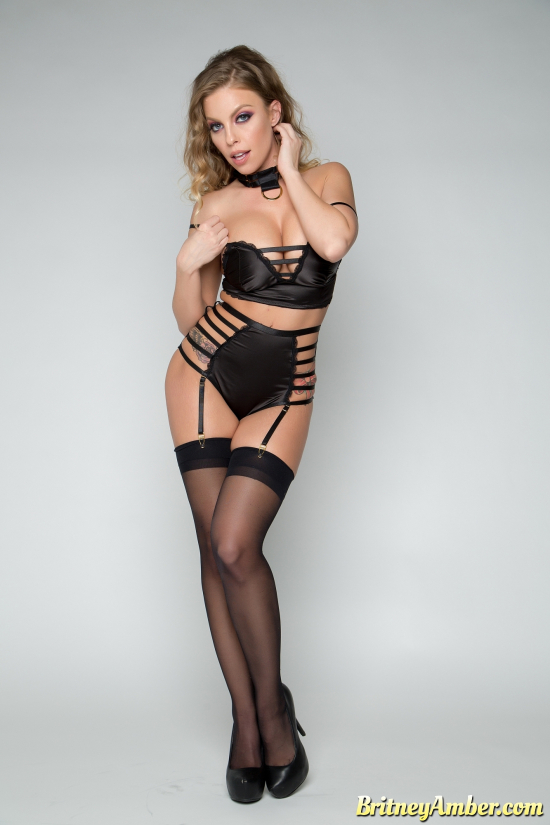 Intoxicating. Beautiful. Fascinating. These are words that perfectly describe adult entertainment superstar Britney Amber. For over a decade, this stunning blonde has entertained erotica fans with her powers of seduction and love of sex. Britney has starred in hundreds of adult films, won several industry awards, and continues to thrive. As her career evolves, Britney has solidified her unique brand by crossing over into mainstream productions and creating social media content.

A California native, Britney first caught interest in the sex side of entertainment when working as a hotel auditor. By chance, she happened to see HBO's Cathouse: The Series episodes, which sparked interest in the Moonlight Bunny Ranch. The camera-friendly beauty was featured on the third season of the television show. After a brief stint at the Ranch, a natural progression for the sexual dynamo was to show off her skills and make a move to adult video.

Britney made her first on-screen hardcore appearance in 2008. From there, the blonde bombshell found herself highly in-demand. A combination of beauty, professionalism, and an insatiable sex drive has kept Britney busy. Right out of the gate, AVN nominated Britney for Best New Starlet. As her star flourished, lead roles in prolific features began flowing. Britney has established herself as an accomplished performer that can provide a sexually compelling and engaging scene.

With her stunning beauty, charismatic personality, and acting abilities, it was only inevitable that mainstream film productions would land on Britney's filmography. Girls, Guns, and Blood is a grindhouse-style sexploitation flick that sees Britney as a badass blonde that's wild and ready for action. Britney appears in The Arrangement; a Jake Hunsicker directed thriller. In this film starring Eric Roberts, Britney delivers an incredible and unforgettable performance.

Britney is the very first ‘Feel Star’ with a brand new KEON Interactive Stroker from Kiirroo, where her fans can experience her via a 3rd dimensional toy.

As Britney has proven she is a stand-out and mesmerizing performer, her work has been rewarded with several awards. Nightmoves honored Britney twice with the Female Performer Of The Year awards (2013 and 2018) and a win in the Best Boobs category (2015). In 2019, Britney won the XBIZ Best Scene - Clip Site award for Britney And Kleio. Adding to her trophy collection was the Best Group Sex Scene win for Climax at the 2021 AVN Awards. In addition to the AVN Best New Starlet nomination and AVN Best Actress nomination, Britney has also been recognized with scores of adult industry noms.

Britney Amber's entertainment career continues to flourish. The celebrated performer has proven she is unstoppable. With adult industry awards, mainstream projects, and a consistently growing brand, Britney is a star that keeps shining brighter.