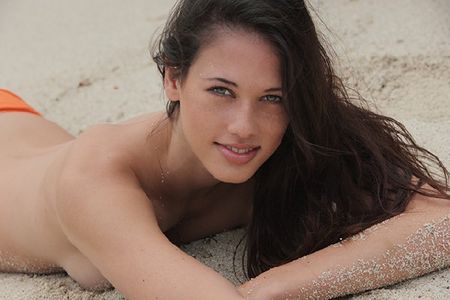 Metro Talent Management is known for the incredibly smoking hot girls it represents, this 19-year old beauty is no exception. She is Tiffany Thompson and she is phenomenal. Tiffany is all natural with 32C cups and this girl is tall, 5'8.

Seriously, supermodel material with a girl next door vibe. This saucy young lady is available for solo, girl/girl and fetish, so as you can imagine, producers and directors are lining up to shoot this beautiful babe for their productions. Expect to be seeing a lot of Tiffany Thompson soon enough!

Tiffany can be booked through Metro Talent Management

METRO TALENT MANAGEMENT Showcases Models With "Babe Of The Week"

"We wanted to do something that would show off our talent and 'Babe of the Week' does  just that," said Roxy, owner of Metro Talent Management. "The program has gone over exceptionally well. The interest and demand skyrockets when a model is featured. It's another forward thinking way that Metro Talent is working to create awareness of the stars we represent."

The current Babe of the Week is the scorching hot 20 year old vixen, Mischa Brooks. Mischa only just launched her adult entertainment career and already the hazel eyed beauty has attained some exciting and prolific shoots through Metro Talent. Established top tier companies like Penthouse and Wicked Pictures have featured Mischa in their productions, with others lining up to star the Metro Talent model.

Which sexy new starlet is the next Babe of the Week? Visit the Metro Talent Management site to find out! 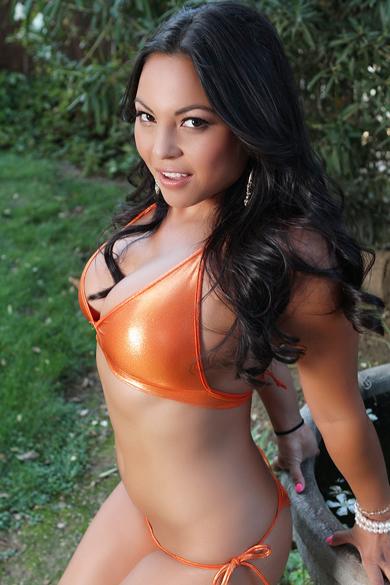 To interview the stars of Metro Talent Management for your Website or Publication;]
Please contact Alexander (Monstar) Raymond
818.730.7254
[email protected]

A press release by
www.StarFactoryPR.com

Home to some of the most beautiful women in the adult industry, the powerful agency moves into another exciting year!

(Hollywood, CA)  Established and respected adult industry agency Metro Talent Management begins its sixth year in style! Launched in Woodland Hills, California in 2005, then a model, Roxy began aiding other talent in arranging shoots after finding success booking herself. As her already impressive contact list grew, what was then a side project organically grew into a business and Metro Talent Management was formed. Since then, a slew of adult's brightest stars launched their careers at Metro Talent. Keeping their models busy is a priority for six year old company, evident by the amount of Metro Talent models featured in the recent October 2011 issue of Penthouse. The issue showcased three of the Metro starlets in incredibly hot pictorials. Prolific media placement has become the standard for the intoxicating ladies of Metro Talent, who have created a legacy of working with virtually all the "high-end" companies in adult entertainment.

"It has been an exciting six years," Said Roxy; owner of Metro Talent. "The industry has changed, and Metro Talent has changed with it. We look forward to our continued growth, the success of the talent we represent and staying ahead of the curve. Our models are extraordinarily beautiful, ultra sexy and extremely professional. I'm very proud of the quality level of work we are known for and plan on making strides to improve on it in the future. The first week I started in the industry a producer asked me what I wanted to get out of this industry. I told him 'have fun, pay my way through college and  open my own agency.' He laughed at me. I have now accomplished that and more."

As Metro Talent begins a new year the agency has begun to make more progressive steps in its marketing and awareness department.Metro Talent has now begun to establish a presence on social mediums like Twitter and Facebook as well as looking forward to new interactive technologies, all with the goal of raising the profile of the Metro Talent brand as well as its roster of super-starlets. "We are taking major leaps forward in insuring that people are aware of the Metro Talent  brand and equate us as the agency with the tomorrow's stars, today," commented Roxy on Metro Talent's future. "We know how to find the beautiful models, we excel at placing them in prolific projects, but now we also want to focus on the overall brand." Branding projects will come to fruition shortly, until then Metro Talent Management may be found on Twitter; http://twitter.com/#!/MetroTalent and Facebook; http://www.facebook.com/pages/Metro-Talent-LLC/226088590782552.

A milestone has been reached for Metro Talent Management! With over half a decade experience bringing the brightest stars and freshest faces in to adult entertainment, the boutique agency launches into a new year with exciting project ahead! 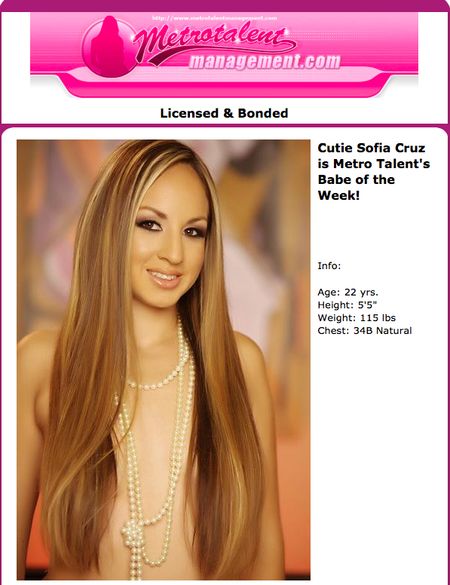 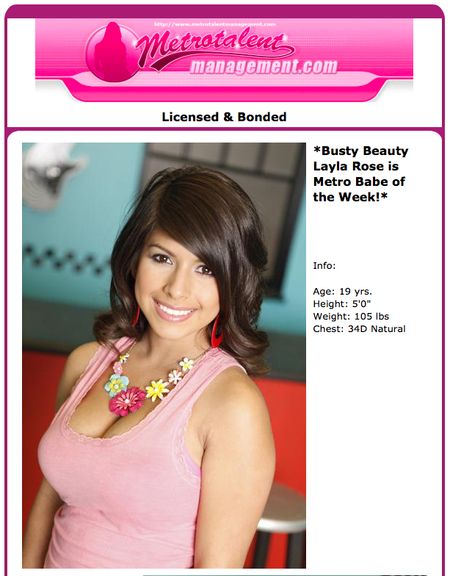 This is one incredible hottie! She's Layla Rose a relative newcomer to adult entertainment, but already Layla has amassed a following. You can see her work on Mofos where this naughty Latina makes sure you get to see all that she has to offer.

Layla Rose can be booked directly via Metro Talent Management 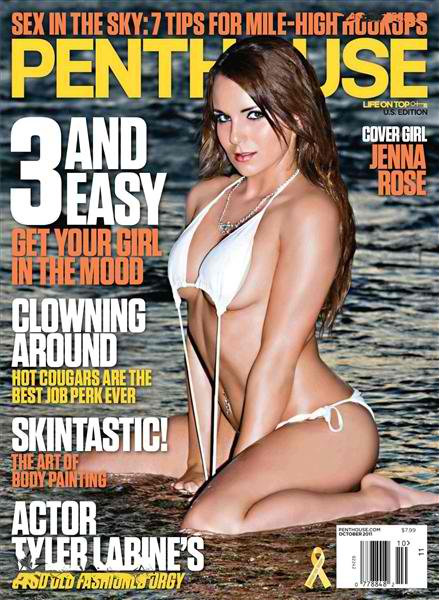 The October 2011 issue of Penthouse is virtually a cover to cover showcase of Metro Talent models.

"We are very excited that so many Metro Talent models have been featured in and on the cover of this issue of Penthouse," said Metro Talent owner, Roxy. "It's very thrilling to see virtually an entire issue dedicated to our talent. I am pleased beyond words."

The Metro Talent issue of Penthouse continues where the September issue left off. The previous magazine spotlighted another of MTM's starlets, Ella Milano, in a scorching hot multi-page feature. Ella is becoming a familiar face to Penthouse readers, as she has been showcased previously. Metro is without a doubt establishing an amazing track record with the world renowned men's magazine.

Metro Talent Management has a been a growing location for up and coming starlets since it’s inception over five years ago. There, talent have appeared in such well known  publications as Hustler, Club, Genesis, Cheri and the aforementioned Penthouse. However this current showing in Penthouse is a reflection of their increasing domination of the adult entertainment world! 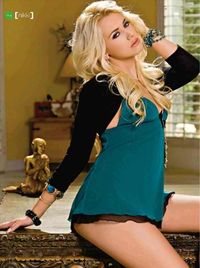 Pick up the latest issue of Penthouse for an exciting look at the Metro Talent Management models! Just look for the Jenna Rose cover!

With Star Factory PR as part of its team, Metro Talent Management will be able to offer its talent more publicity opportunities, including signings, interviews and appearances. With the goal of providing stars a multitude of avenues to attain more exposure for their work.

SFPR has over half a decade of experience in adult entertainment and continues to thrive with it's clients attaining prolific press pieces. Effective immediately, all media and interview requests for the stars of Metro Talent Management may be directed to Alexander Raymond, [email protected]

Metro Talent Management is the agency to watch! Even more so now with the procuring of publicity experts, Star Factory PR!